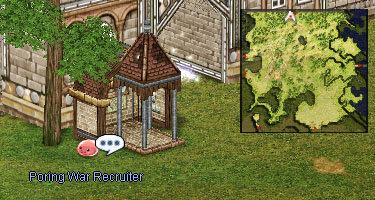 The Poring War Recruiter can be found outside Prontera's south exit

Poring War is a short player-activated event where participants fight for either Angeling or Deviling.

If you do not have enough participants, you can always recruit players using the Broadcast NPC (poring_w01 104, 97)

The objective of the game is to eliminate the opposite team's mascots.

ie. If you are on Team Angeling, win the game by eliminating both Devilings before your two Angelings die.

Event Coins can be exchanged at the Poring Vending Machine in the first waiting area.