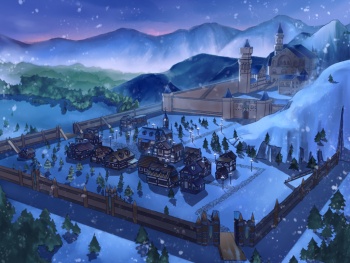 IsFörsvar is a custom area that can be accessed by heading west of Lutie. The region was first introduced in the Winter Solstice 2011 event. Later, the town, surrounding area and quests were revamped and re-released in January of 2013.

A retelling of the Winter Solstice 2011 story.

Long ago there was a princess who lived in a kingdom high in the mountains. The kingdom was not the most prosperous, however the people never went hungry. One fateful day the kingdom was attacked and a loving princess prayed to the gods for help. One of the gods forgotten by many except this recluse kingdom who prayed to her, answered the call. Skadi, the goddess of ice, gave the princess the power to defend her home. Unfortunately, she was given another gift along with that power. The princess obtained immorality, an ability that became the kingdom's downfall. Find out the truth behind this legendary princess.