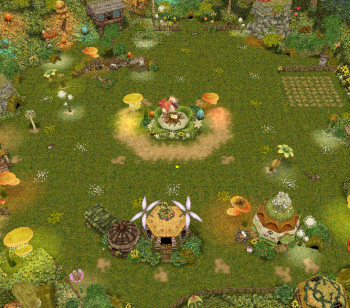 Eastrelund is a custom area that can be accessed via special item that is obtained only during spring. The small realm was first introduced in the Easter 2014 event. Later, the town, quests, and minigames were revamped and re-released in April of 2015.

A small realm that cannot be found on any map, Eastrelund is guarded by the Marchwarden (aka Easter Bunny) and ruled by the young Queen Eostre and her Council.

Long ago, our ancestors were but dumb beasts in your realm. Even then, the Warden and Ekelipses were locked in dire battle. The story goes that Ekelipses drew to him minions to do his bidding, greatly managing to injure the Warden. In return, the Warden drew to him champions to aid him in the neverending war. Such were our ancestors, great heroes all. The Warden and his champions proved victorious in a great battle, pushing Ekelipses far into the shadows, where he remained for quite some time. - Esthelweith, Councilwoman

Ekelipses (aka Mad Eclipse) manages to oust the ruling party and grievously injure the Marchwarden. Eastrelund is razed to the ground and its citizens go mad, mad, mad. See Easter 2014

The effects of Ekelipses are still reverberating through the citizens, despite the realm itself on the mend. Ekelipses himself seems different... See JellyRO in Spring!

This NPC is repeatable every 48 hours. There is a 10% chance that the potion will temporarily incapacitate the EB, thereby extending the cooldown time.

Assist the council in capturing the fallen citizens.

Clear out the pests and find the source of the infestation both inside and outside. Watch out for Annoying Bugs!

Harvest and deliver the crops.

All quests are repeatable every 24 hours.

Speak to Egret to start this memory game. Player must match all the paired NPCs in order to win. There are three levels of varying difficulty.

Speak to Etonne to provoke him into chasing you. Player must elude him for a designated amount of time to win. HINT: Take your shoes off!

Speak to Egarou to start this mini racing game.

A mother needs help collecting her children. Player must herd all 6 pickies home within the time limit to succeed.

Speak to Essie to play a random one of two flower games. Player must correctly count the number of spawned flowers, or player must destroy the designated flower color.

All minigames are repeatable every 24 hours.

These NPCs are available ONLY during springtime.

This Trade NPC (prontera 142,99) will trade Dyed Eggs or Specialty Eggs in exchange for items and zeny.

Specialty Eggs require Zeny, 2 Egg, 5 Light Granule and Various Extra Ingredients. The items can be hotkeyed and will last for 20 minutes once opened.

Find the Seed of Hope.

The first lies in the lab of hubris, where the angry dead await their vengeance. The second lies in the furthest hell dimension, with the devil himself. The third lies nestled in the tower of his adversary, where angels do not sing. The fourth is a place with no name; a garden of pure evil. The fifth...I will tell you, for I believe you will despair. The Misty Forest awaits you, with much treachery and misfortune. - Queen Eostre

Defeat Atros, Baphomet, and the Lord of Death.